The end for some gymnasts, the beginning for so many more.  From the "dark horse" first year seniors, to the "comeback kids", trials were an emotional roller coaster as a viewer, I can't even imagine what it must have been like for Nastia, Sabrina, Alicia, Becca, Brenna, who competed on a broken wrist, Sarah, Anna, Elizabeth, Kennedy, or even Bridget, who couldn't even compete due to injury.  Then there was the team, Jordyn, McKayla, Aly, Gabby, and Kyla.  I can't even imagine what it must be like for them. 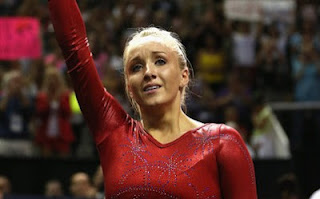 In tears after her bars and beam, Nastia Liukin bode a very sad farewell after last night's competition.  She fell on her laid-out gienger, which was the first time I've seen her fall on that.  Fortunately, finally pulled out the dismount, so maybe that fall was a blessing in disguise (for her fans, not for her, she fell), so she could refocus, and finally pull that dismount to her feet, which was great to see.  Her beam was one of the best she's done it ever since she came back.  I wish she came back a little earlier, it would've been great to see her
Property of Fulltwist.net
compete internationally again.  Her tearfully farewell was met with two standing ovations, which she said was the greatest way she could ever imagine ending her gymnastics career, officially announcing she was done. Photo property of Rickey.org
This picture was just eight months ago, and there was no one who would've thought that she would look so beastly just 8 months after rupturing her Achilles Tendon.  The power of her rudi on vault was amazing, and she looked the same on this event as she did in 2010, when she became the world champion.  Her beam is easily one of the best in this country right now, maybe even the world.  Her entire career was inspiring to many people, not making trials in 2004, coming back and winning floor in Melbourne in 2005, making the team in 2008, only to have a disappointing Olympics, and coming back for redemption, and getting a little bit with that world title she never had, only to rupture her Achilles, come back and not make it.  It's hard to see her not competing, but I wish her the best in everything she does, and I will always love her competitiveness, and dedication to the sport of gymnastics. 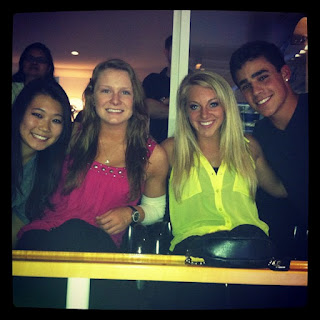 
Bridget took this picture at trials, which ended her career after she injured her elbow in warm-ups.  It wasn't the ideal way to end her elite career, but (hopefully) when people think of her her, they think of the world championship in 2009, and nationals, where her bars look good, if not great, and she came back in the all around after a bunch of injuries.  Her comeback from injuries to the shape she was in was amazing, and Florida is lucky to have such a talented athlete to add to their line up come September.


Becca had a rough time at trials.  On day 1, she hit bars about just as well as she could do it.  But then she fell on beam on her arabian, and fell on her dismount.  She never fails to scare everybody on that skill, but I particularly admire her determination to never stop trying.  However, I was so scared for her knees in particular every time.  No one knew why she kept trying, but I admired the determination.   On day 2, she had an awful go on bars, as you can she in the video.  She fell not once, not twice, but three times.  When does that ever happen to Becca on bars?  My friend who I watched this with was shocked, and when Valeri stoped her after the third fall, I felt my heart break.  This is never how anyone imagined the end of her career, and she will be sorely missed.  NBC didn't show her beam, but I heard she hit the Patterson, and not only did she hit it, I heard from someone in the arena she stuck it.  What a way to end your career, sticking the dismount every one told you you shouldn't compete.  I wish Becca the best of luck in whatever she does.


Anna Li had the competition of her life and shocked me by becoming an alternate.  Don't get me wrong, I love this gymnast, I'm a sucker for an underdog rising to the top story, but I just didn't see her being an alternate, kinda like it was all or nothing with her because she wasn't an all around gymnast like you want in an alternate.  It all came down to bars, which luckily for Anna, is her best event, by far.  Her Rybalko to Yaeger combination blows my mind every time.  It is hit way harder than it should be, the Rybalko is not a pirouette move, so it should not be deducted as one.  I wish her luck in whatever comes next. 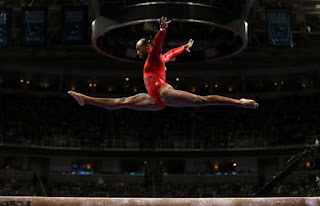 Photo Property of gymnastics.about.com
She burst onto the scene this year as a first year senior, and if you asked me last year if she would even be considered for an alternate spot, I probably would've asked who she was.  That's how amazing Elizabeth Price, or Ebee, burst onto the senior scene this year.  She has an gorgeous amanar and is great all around, which makes her the perfect alternate.  I really hope she continues after this year, because she is full of potential to be the star of the next quad, a la Afanaseva, which coincidentally, Ebee uses the same music as Afanaseva.


After a great showing at the Jesolo Cup, many people put Sarah Finnegan on their Olympic Teams.  I never got that far, I was being realistic, but I was sentimentally hoping for her to succeed.  She reminds me of Aly Raisman, just less consistent.  She knocks floor out of the park everytime, and her Arabian to Korburt flip on beam blows my mind.  She is full of potential, and I could see her being the Bridget Sloan of next quad.
Posted by Allie at 12:27 PM