Okay, as of right now, London is 9 days away, and while I was trying to sleep last night, I was thinking about how similar these past two quads are.  So, I'm going to analyze, these past 2 quads, and see if they really are as similar as I think they are, when I'm literally about to fall asleep:) (Oh, this is strictly international, if you guys want a national version, I'll do that later:) 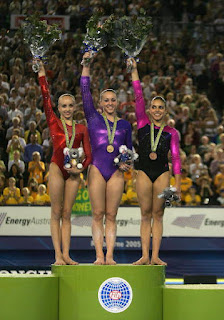 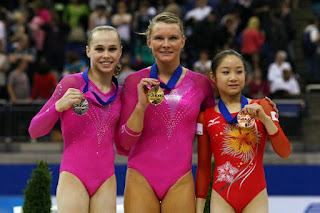 
In 2005, the Americans went 1-2 in the All Around by .001, Chellsie Memmel beating Nastia Liukin after a great competition.  In 2009, Becca Bross was in the lead, and after a great floor routine from fellow American Bridget Sloan and a fall on Becca's final move of her last pass, lost the title by .05.  Also similar in both years, the winner was a veteran, while the silver medalist was a first year senior, and the bronze medalist was a first (2005), or the first in over 40 years (2009), for the country they represented. In 2010, A different gymnast won the title, while an American medaled silver in 2006 (Jana Bieger), and bronze in 2010 (Becca Bross).  That's really all that is similar between 2006 and 2010, aside from the relatively weak field in both years.  In 2007, a first year senior from the U.S. (Shawn Johnson) won the title, after an undefeated season, which is a very similar story-line to Jordyn Wieber, from the U.S. who won the title after an (almost) undefeated season, in her first senior season.


In conclusion if the AA is similar in 2012 that it was 2008, it would be someone who has been around (no first year seniors), and wasn't really in the running (Nastia placed 5th in 2007 after a fall on beam) last year.  So, my guess would probably be Gabby Douglas, an American who placed fifth in qualifications last year, but couldn't compete in finals due to the two-per-country-rule.


So, there is no team final the year after an Olympics, so yeah, no similarities between 2005 and 2009 here except for they didn't exist, so let's skip to 2006.  In 2006, China won the team title, while U.S.A. took the silver, and Russia took the bronze.  Compared to 2010, the podium flipped in a way, with Russia, U.S.A., and China taking gold silver and bronze, respectively.  In 2007, The U.S. received their second ever title, ahead of the Chinese and the Romanians.  That is a pretty similar story to 2011, where a very strong U.S. team went 12-for-12 and won their third gold, beating out the Russians and Chinese.


So, if this plays out like it did in the last quad, The Russian may come out victorious.  However, you never know.


I'm not going to do the EF, just because those are a little more random:)


Conclusion: I think that the past two quads are very similar, not in the dominance of the teams (although it is a reoccurring theme in these quads that the U.S. are pretty dominant)  but in the way the medalists and final results are pretty identical, in the countries present and the pattern of placings.
Posted by Allie at 3:08 PM